1 set of HP200 cone crusher, its standard configuration is 132kW motor (rated current is 260A), the actual configuration is 160kW motor.
On July 10, 2014, after the aircraft was activated, it was found that a periodic crash sound was emitted from its interior.
The law of the impact sound is: every time the moving cone rotates 1 circle, there will be one impact sound, and the current will also have a periodic large fluctuation.
The machine was disassembled and inspected, and it was found that one tooth of its Girth Gear was broken. The broken tooth has fallen into the oil pool under the big and small gears. 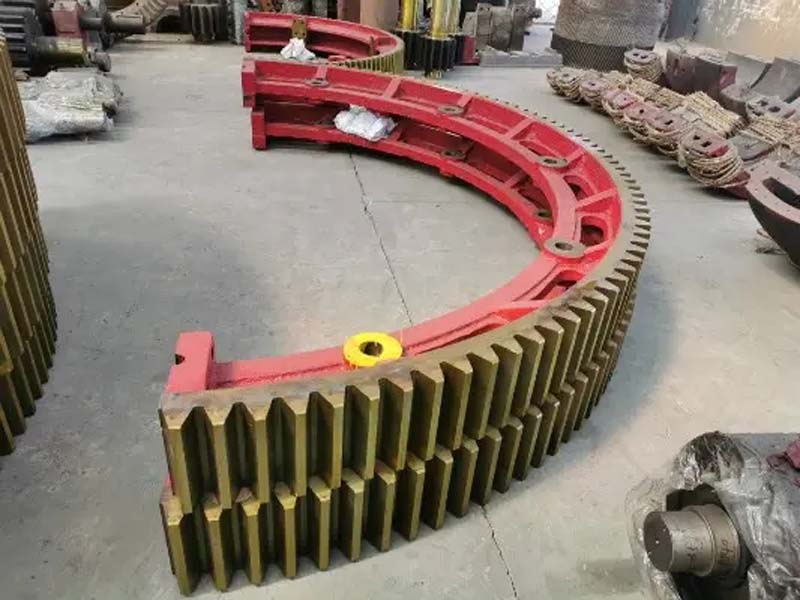 3. Troubleshooting and cause analysis

(1) There is an overload phenomenon
The equipment management engineer carefully checked the machine running record and motor current record
It was found that in the normal production process, a large peak current of 344A occurred once, which was 1.32 times the rated current of the motor of this machine, 260A.
This is the time when the big gear breaks. This shows that the machine has experienced severe overload phenomenon.

(2) Frequent alternating loads
Check the machine’s operation record and motor current record carefully again, and find that the machine has repeatedly started and repeatedly stopped.
Each shift starts and shuts down 6 times within 8 hours, and there are 10 times with no reversal of ore feeding and no load idling.
The inspection found that the ore supply of the machine was unstable, that is, during the operation of the machine, the ore was sometimes absent, and the ore was often absent, causing the manoeuvring cone to rotate forward for a while, not to rotate for a while, and reverse for a while, resulting in the machine being subjected to frequent alternating loads.

(4) The large gear is close to the fatigue limit
The HP200 cone crusher was put into production in 2007 and has been running continuously for 7 years. Its large gears have not been replaced, so it is inferred that the large and small gears have approached the mechanical fatigue limit.

In order to prevent the machine from affecting the production due to broken teeth of the large gear, we have taken the following 4 preventive measures

a. Improve ore supply conditions to ensure uniform, continuous and stable supply of ore.
b. The second is to adjust the size of the ore discharge port correctly to prevent overload caused by direct collision between the moving cone lining plate and the fixed cone lining plate due to too small adjustment.
c. Install metal detectors and electromagnets on the belt conveyor to ensure clean and thorough iron removal.
d. In addition to replacing the large gear, a spare pinion is also required to prevent the pinion from reaching the fatigue limit and failures occur again. After the repair and the above precautions were taken, the machine returned to normal operation.